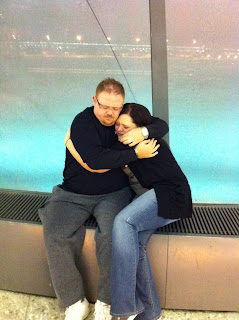 Our son keeps amazing us. Throughout the journey of responding to God to move overseas, there were moments when I really felt like he was a normal kid....but other moments where his advanced understanding of things blew our minds. Listen to this story...

The day finally came. The day that we had been talking about, looking for, waiting for, raising funds for...the day that we would move to Cape Town to respond to what God asked. Davis was filled with a palpable excitement. He was smiling loads and kept yelling out "yay, we are going to Cape Town today!" Mom, Dad and Selah (Aunt Bird) took us to the airport. After a nice dinner, we made our way to the airport...a dreaded drive, frankly. We decided to just say bye to Mom and Dad at the curb when we unloaded our luggage. Selah opted to park and come in with us. After checking in, we could only walk a few yards before we got to the elevator that would take us down to security. It was there that we bid my sister, Selah farewell. We did...and it was super hard for all of us. We were all crying. Davis was just stoic looking. We took the final walk to the elevator (because we had the stroller) and got on it. As soon as the elevator door shut, he LOST IT! Sobbing. We held him, got off the elevator and stepped to the side where we took about 5 minutes as a family just grieving. Davis clearly understood what had just happened. And it was almost like he wanted to be strong for his Aunt, then lose it when she was gone. And that is the crazy part. He is FOUR--only been four for a week! It really stunned us that he was so in tune with the reality of what was happening.

Many people ask how Davis is handling all this. Frankly, he is doing amazing! And he really seems to grasp far more than we thought he would at his age. I know parents are supposed to brag, but we are so proud of Davis and his tuned in and sensitive heart. This kid blesses us every day. We feel super privileged to parent him.

Many people tell us that he will never remember any of this...and they are probably right...but, we believe that although he may not remember specifics, this is shaping him nonetheless.
Posted by Noah at 1:08 PM

That is the sweetest thing I've heard in a while.

We had a similar super tear filled departure when we first left. It's definitely a hard move, it doesn't matter how much confidence you have in God's call.
And I hope Davis does remember this. I hope he remembers that his parents gave up the life they knew and felt comfortable with to follow God to an unknown land b/c they trusted Him that much. Those are the things our kids need to see from us. He is certainly being shaped!
CP

Pastor Noah and Tricia:
Thanks for sharing that. I am really enjoying and encouraged by reading your blogs and seeing the beautiful pictures. You and your family are certainly growing in a new and profound way in the Lord and sharing this is helping us to grow as well. Keep them coming! Be blessed!!

Thank you all for your kind words!! Much love!