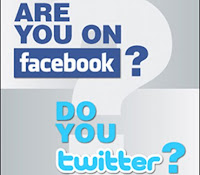 You may have noticed that I have a pretty regular web presence. Well, that's intentional. Very intentional. There is a method to my madness. But, to be honest, I catch some heat for it. I catch some judgement for it. I field some passive aggressive comments for it. When I first started blogging, it was opposed by some. When I first started twittering...the same. Facebook...the same. Still is. Not sure why, either. But, guess what? When the Bible was originally translated and distributed to people, leaders were killed over it. Every new thing that is introduced to the church (any form or result of social change) has been initially opposed. Then, it became common and accepted. Then, the next new thing is opposed. Then accepted. Repeat. It's been the story of the church and change.
This week, I want to process my philosophy of digital discipleship. I think that I first heard the term digital discipleship from Mark Batterson. The term itself implies something of what I think.
Here are some of the things I will touch on this week:
I invite you to tune back in throughout the week and join the chat. I would LOVE to hear from you and learn from you in this too.
--Noah
Posted by Noah at 7:39 AM

I'm confused. Are you saying you want to be killed over your blog? Cause if so, I know a guy. :)

In all seriousness, digital discipleship is great introduction to the Way. You can promote the gospel from seemingly unlimited angles and the Holy Spirit can indeed work through the internet.

But this question still stands: how can we blog, tweet, facebook, etc in a way that it becomes spiritual blessings instead of just more information for our readers to cram in their busy schedules and rapidly filling brains?