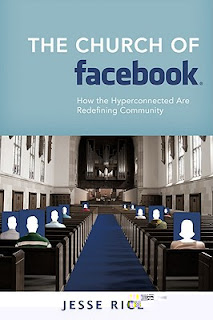 Last Monday, I saw that this book was just published; "The Church of Facebook" by Jesse Rice. I asked Tricia to order it for me (ordering things online is one of my least favorite things to do). It arrived Thursday. I finished it this morning.
Overall opinion of the book: Not my favorite. It was a pretty big let down. If you are a Facebook hater, then you would love it. But, if you, like me, see Facebook's redemptive and endless possibilities for impact, you won't love this book.
I am NOT saying that some of his points did not have value. They did. I learned stuff, for sure. And was even convicted a few times. I AM saying that I did not think that he brought a balanced perspective. He basically believes that:
He did have some profound insights as well:
In a very short period of time (5 years), a very large population (several hundred million and counting) has been synchronized (pulled into the orbit of a single web platform called Facebook). And what kind of gravity is capable of accomplishing such a feat? The human need for home!
Facebook offers a sense of "Home" for many:
My wife told me to write another book with a similar title to explore the positives of Facebook, to bring balance to this one. I'm tempted.
Posted by Noah at 5:12 PM

The Tower of Babel comes to mind, as well as the verse, "... unless that LORD builds this house ..."

I am not anti-FACEBOOK. I am concerned that there are many factors involved that should be of great concern to Christians. Your blog does well in addressing a number of these concerns.

My major concern has always been our need for face-to-face relationship. A screen is not a face - it can become a false persona that promotes hypocrisy at the expense of true intimacy. The secret solitude of time spent before some screen seems soul-scarring sans some spiritual sustainment from Scripturally sound devotional practice.

It is not good for one to be alone. FACEBOOK fun feels like fellowship, but one would be foolish to let that false feeling substitute one's computer for community.