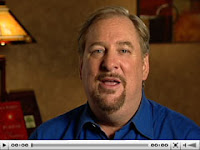 As you probably heard, Rick Warren was asked to give the invocation at the presidential inauguration next month. After that announcement, the media kicked in to full fury surrounding that decision.

Rick Warren just recorded this video response to explain to his congregation some of the recent media surrounding his decision to accept Barack Obama's invitation. He says some pretty amazing things here. As far as i am concerned this is one heck of a response! He covers three main areas:

1) Rick re-states his long-held view on the Biblical definition of marriage.

2) Secondly, he discusses civil rights and why he believes no American should be discriminated against.

3) Rick discusses why he accepted the invitation to the inauguration. He also talks about how he will respond to the many attacks and accusations appearing in the news, and why it is vitally important to return love for hate.

I love Rick's heart and respect his Leadership. If you take the time to watch this, I would be interested in what you thought?

I have a lot of respect for him too...