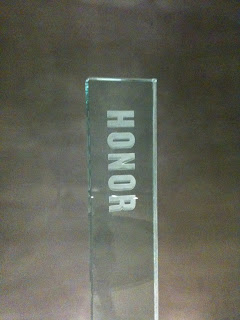 Honor. I really want to understand it more. Craig Groeschel shared some really profound thoughts about honor at the Catalyst Conference earlier this month. Here were some of his thoughts, mixed with some of mine.

We have an honor problem. Ours seems be a culture of decreasing honor.

We lack rightful honor for our leaders and parents and it's probably because we lack honor for God.

Honor publicly leads to influence privately. When you honor your leader publicly, there is a better chance they will let you influence them privately.

If you honor the leader or husband or parent or whoever, they will often and likely rise into that level of honor and anointing.

Respect is earned, but honor is given!! Don't get the two twisted.

Exodus 20:12 says "Honor your Father and Mother and you will live long in the Lord your God is giving you." I think that this applies not only to parents, but to other leaders in our lives as well. Notice this: It does not say, "honor them if they deserve it" or "honor them if they have been nice to you"! No. It says honor them. Period. I fundamentally believe that you can extend honor whether you agree with them and appreciate their behavior or not.

God, help us to learn honor in new ways!
What is your definition of honor? And how have you best learned to show honor?
*I took this picture today at an Infantry Museum we visited here in Columbus, GA.
Posted by Noah at 10:17 AM